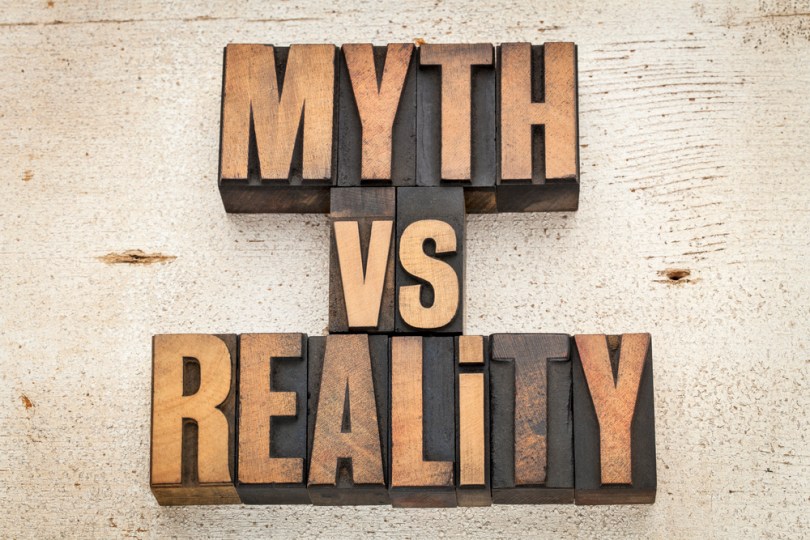 Have you heard the one about the lonely singleton who had nothing better to do than look for love online? If you happen to be said singleton there’s a good chance that you have – and we’re betting you’ve heard numerous other myths relating to online dating that are less than supportive of your quest for love, too. You see, online dating hasn’t always been the acceptable route to a relationship that it now is; once upon a time online daters tended to keep their profiles a secret from those who knew them, for fear of ridicule. So, now we’ve busted the myth that online dating is for the desperate, what else can we dispel?

Online dating is only good for hookups

Apps and websites such as Tinder, Plenty of Fish, and OK Cupid have been blamed for the creation of a ‘throwaway dating culture’; a so-called dating apocalypse, during which men and women meet for casual sex and little else. Even today there’s a perpetuating myth than online dating never leads to meaningful relationships. However, that doesn’t take into account all of the successful matches that have happened online, or the friendships, marriages, and even children that exist because of that first message. According to report published by eHarmony, online dating is the second most popular way to meet people. Meanwhile research has found that 5% of Americans in a committed relationship or marriage credit online dating as being the source of their happiness. Myth busted, we’d say.

You can’t trust anyone online

There are always going to be fantasists, and, if you’re really honest, you’ve probably been tempted to exaggerate a portion of your profile to make yourself appeal a little more, well, appealing before. When it comes to online dating it’s always best to be honest from the start, and the majority of research tends to suggest that the people you’ll come into contact will have done just that; writing for Psychology Today Gwendolyn Seidman Ph.D. pointed out that most online daters realise that it’s fruitless to lie in a profile when such mistruths would probably be discovered pretty quickly upon meeting. Yes, it’s true that people are far more likely to lie about themselves online, but when such falsehoods include weight and height, using an outdated photo, and choosing films they may not yet have seen, we think it’s a little sweeping to call out such singletons for being untrustworthy. That said, it pays to keep yourself safe online, so only reveal the details you’re comfortable to.

Online dating is for the young

With the emergence of websites such as Saga Dating, Muddy Matches, MatureLove, and Just Senior Singles, we think it’s pretty safe to say that online dating isn’t only for those in their 20s and 30s. Indeed, there’s a dedicated love-match service for almost anyone out there, regardless of their age, sexual preference, or fetish. And why not? People are living longer, healthier lives, and so it stands to reason that many of us will decide to find love again well into our twilight years. Indeed, far from being a pastime for the young there’s been a marked increase in the number of older users accessing the main dating websites in recent years. What’s more, eHarmony has discovered that 76% of women admit to chasing men that are older than themselves. Sure, online dating may have reached its peak with those in their 20s and 30s, but they’re by no means its only demographic.

Online dating is more acceptable, and popular than ever before. Sure, there are still some myths that continue to do the rounds, but we’re pleased to be a part of an industry that’s doing its bit for love.

Warning: count(): Parameter must be an array or an object that implements Countable in /nfs/c04/h02/mnt/65055/domains/easydatingprofiles.com/html/wp-includes/class-wp-comment-query.php on line 405