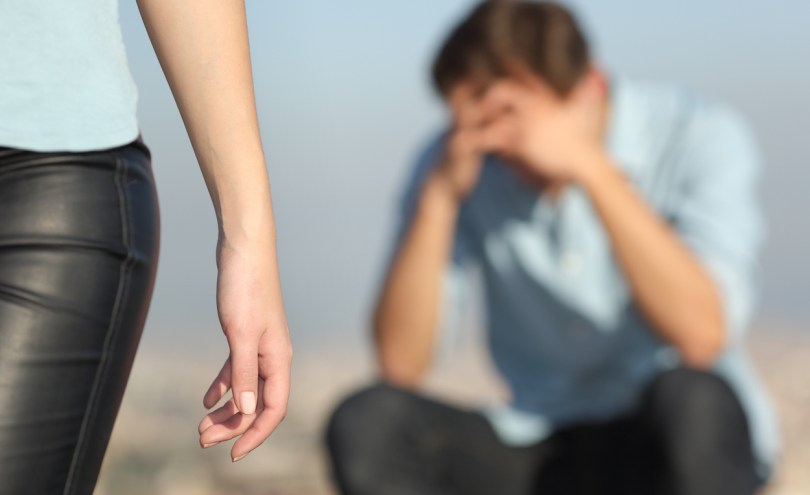 So far we’ve covered the topics of rejection, letting people down gently, learning to recognise when it’s something more than lust, and the kinds of body language to look out for on a first date. However, would you know what to do if a relationship started to falter? Have you got the courage to walk away from a budding romance when it becomes obvious there’s nothing there anymore? And, quite simply, would you know a red flag if you saw one? If you find yourself questioning why you bother, or feel frustrated more often than you really should, it could be time to walk away…

You’ve been chatting for less than a fortnight and have yet to meet in person, but your date is already imagining what your children might look like; he’s keen, but perhaps a little too keen. While it’s nice that you’ve found someone who wants to share the rest of his life with you, his persistence may not be what you were looking for when you agreed to try online dating. Indeed, his actions may even verge on the scary. If you find yourself groaning when you notice you’ve had a new message and dread seeing his name in your inbox, it’s time to explain your position and walk away.

Six weeks in and you’ve suspended your online dating account in favour of swapping text messages, emails, and private messages on social media. Well, you’ve both agreed that you’d like to see where this goes, so what’s the point in continuing the search? Everything’s rosy, until you realise that she’s still on Tinder, and logged into her profile as recently as three hours ago. What is she playing at? While there could be a perfectly reasonable explanation for such behaviour, it’s worth querying whether you’re on the same page after all. Is this a relationship, or are you back on the market?

Red flag number three: He can’t be pinned down

Your man likes to message at random times of the day, and can never be trusted to respond to a relatively urgent request for attention; he cancels dates at the last minute, has so far refused to give you his direct telephone number, and never wants to meet within a ten mile radius of his place of work. Do you embarrass him, or is he hiding something? When it comes to online dating, some people will always refuse to take things seriously; online dating is seen as a fun way to meet new people, after all. If your match is something of a flight risk there is the chance he’s hiding something – but he could easily be a little too embarrassed to admit he’s had to resort to online dating. Ask; you’ll never know unless you do.

When it comes to online dating we have to take a lot of what we’re told at face value. We have very little evidence to the contrary, after all. However, if your date has been spinning a series of stories that just don’t make sense it could be time to pay a little more attention. Has she been relaying details that just don’t add up? Have you noticed, more than once, that her facts seem to alter from day to day? If you’ve any reason to suspect that your date is lying about her lifestyle or intentions pull her up immediately. It could be an honest mistake, or a case of lying to impress. However, if it’s more you need to walk away now.

Red flag number five: When it’s not them, it’s you

He’s perfect, she’s wonderful, and you have a fantastic time together. However, something’s just not right. Perhaps you were never looking for anything so serious. Maybe you’ve realised you weren’t ready for a relationship after all. If you’ve suddenly got cold feet it’s essential to explain your feelings to the other person, saving them countless tears and anxious phone calls in the process. If really you, rather than them, have the decency to be honest.